Updates and changes regarding the servers development can be found here.
Locked
1 post • Page 1 of 1

Welcome to the new forums! We've moved away from zetaboards for numerous reasons as the service didn't fit our community. We're currently developing a website that will make the handling of applications a breeze for both you guys and us in the staff team, so we took the opportunity to move over to a more permanent forum in the process. This forum is going to allow a lot more to happen for the server and its development going forward. As many of you know we've a commitment to changing Shinobi Gaiden for the better and our staff/development teams are going to be in full swing to make the game unique and improve on it dramatically over time. The addition of these new forums to our wipe update is not only going to make this a much easier process for the lot of us, it's also going to improve things for the players as well.

Not only will these forums act as a community hub the more we grow, they'll also help a lot of you with character development and IC narrative.

Eventually we plan to add sections such as character profiles/development, icon galleries for iconners to post their designs, OOC/Unrelated discussions & more.

However for now, here's an overview of the current sections & forums...


Server Information
Announcements
As per usual all new information regarding the server and community will be posted here with the threads being linked on discord.

Development & Changelogs
Something a lot of you will appreciate, we're adding a development and changelog forum to keep track of what is being changed on the server and everything the team is working on. Every major update there will be a post like this that explains the changes that have been made and reasoning for them as well as a changelog. Each patch or minor update will also include a changelog that briefly outlines the new additions and revisions. This allows you all to see everything that's being fixed or changed, keeps you up to date and gives everyone an idea of the direction the game is heading in.

Server Guides
Finally we've cleaned up the guides section. We're still in the process of rewriting them all however it's now far neater and everything is in one place. You'll have noticed we recently made a revised version of the previous combat guides and included everything in one post that you can find right here. In the near future we'll be making all the guides as clean and to the point as this, ensuring everything is easy to find and not a chore to read through.


In character
Lore
Not a lot has changed aside from the fact we're now including individual posts for each clan that outline key events that have taken place in the IC world. There's a sub-forum inside the Lore section for each major village that contains these posts on each clan. These sub forums will be tracking all of the history and ongoing events within each of them, if you do something extremely notable like assassinate the head of the clan, kill an elder, or exterminate the entire lot of them it'll be put in the post like this...

June 211 - Hideki Namikaze has been appointed the head of the Namikaze clan after several years of training and cultivating their skills along with their mental knowledge. He has been recognised for his decisions that lead to victory on the battlefield and his prowess in combat as well.

The information in these posts act as 'common knowledge' so there will not be specifics listed unless they would be something that everyone would know.

World News & In Character Events
Another forum that's changing for the better! The World News section is going to be a place where all players can get involved. The description of this forum is as follows...

'Breaking news and whispers carrying rumours become public knowledge. Starting a shop on your character? Is your organisation making their plans known? Post about it here.'

Speaks for itself doesn't it? If your character is doing something notable or you want players to get involved with something that's happening you can make an in character post about it. For example, if you're a blacksmith who's travelled to a notable village you can put up an advertisement in this section that notes how people in the area would spot a tattered note pinned to the local message board that has been written with messy handwriting. The note itself informs them of where your character will be conducting business and the specific times.

Each village also has it's own sub-section within here for news relating specifically to the locals. These sections are listed as 'Ihaigakure News' and 'Shimogakure News'. If you're in one of the major villages and there's something your characters done that most people passing by would take note of you can create a post describing how many walking through the area would perhaps see it etc..

Of course you will need to be roleplaying in your post when making a topic in these forums. This section will be expanded on as the wipe continues, meaning more options are going to be available to you all.


Out Of Character
Applications
This is going to be a temporary section until the website is up and running. The Applications forum will function as it always has only now it's much neater and the application templates are all in one spot. Continue to submit your apps as you always have (while following the correct formats!) for now.


Suggestions
The discord channel was not working for suggestions at all. We are now making use of a proper section where you're able to post legitimate suggestions for the server. Admins and developers will discuss the changes and ideas with you and the rest of the community, everyone is able to post and talk about the topic. Once it's approved it can be forwarded to the development team by a staff member to be worked on.


Ban Appeals
As said in this post we're cracking down on excessive toxicity, grime and the consistent bad attitude that some players have in general that ruins the experience for others. Those who are banned for such things are able to appeal their bans here and ask for a second chance if they make it clear they won't repeat the same behaviours as before. If you were banned by mistake this forum is also the right place to clear up the issue.

General Discussions
The first forum have in this section which you can use to talk about the game and whatever is currently happening.

Off Topic
A place for casual chat and discussions on things unrelated to SG.

Any bugs you see on the forums will be fixed shortly. We're still working on correcting them and improving everything so bear with us, it won't be long! For now set yourself up an avatar, post your stale memes in Off Topic and have a look around! If you're unsure of how to do so...

You can change your avatar by going to the 'User Control Panel' located at the top right of your screen.

Once there, head over to profile and hit 'Edit Avatar' 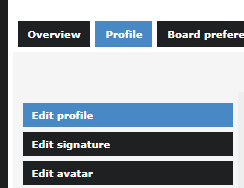 We hope that you enjoy the new forums and that they improve the overall exprience for you. There's plenty of information on the new wipe dropping over the next day so get excited!